kubic is a relaxing optical illusion puzzle game based on M.C. Escher’s art, impossible objects and other geometric designs. The object is to construct the goal configuration from a number of pieces.

Presented in a simple, clean design and minimalistic art, kubic is a premium game with no in-app purchases. It’s just your brain and more than 60 escher-esque puzzles.

kubic is based on an old PC game, Heaven & Earth released in 1992. We took the section called “Convex – Concave” and brought it to the mobile devices with a touch based interface.

Levels divided in 6 groups:
• Ocean (Blue) – “2D” Shapes are basically two-dimensional arrangements.
• Desert (Orange) – “3D” Shapes appear to be three-dimensional, but remember to think in two dimensions.
• Mountain (Purple) – “Convex/Concave” These optical illusions are inspired by Escher’s famous “Convex and Concave” lithograph.
• Sky (Green) – “Up/Down” These optical illusions are inspired by the Penrose Triangle featured in Escher’s lithograph “Waterfall”.
• Escher (Mixed) – Based on letter designs that spell out MC ESCHER.
• Print – Based on the printable magazine version of Convex-Concave puzzles. 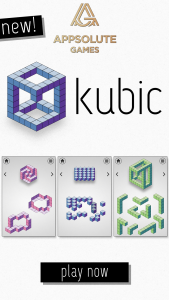 If you’ve seen any paintings by MC Escher, Kubic will be very familiar to you. This quirky puzzle game bends the limits of space and reality to make you create structures that, in theory, should be impossible to replicate. Kubic Review – Playing with shapes

You’ve seen brain-bending, mind-mangling puzzles before. But never this hard, never this eye-boggling, never this enjoyably frustrating. Inspired by the famous optical illusions of MC Escher, nothing in the block puzzles here is quite what it seems. Beautiful puzzles, beautiful music and no time pressure make this the perfect mobile brain-training geometrical puzzle. It’s hard not to love Kubic even if you don’t normally go for puzzle games.

All About Windows Phone

In search of a Windows 10 puzzle game full of optical illusions to master? Kubic might fit the bill with over 60 geometric challenges. Kubic, a mind-boggling Escher-inspired puzzler for Windows 10